Translation by Sharon Williams at Languages For Living.

Ike really got to practise his skills at identifying different sorts of features and was even able to explain how some of them were formed.  Ike found his Coastal Kung-fu helped him do this.  Gareth showed him this video before he went out so he could better explain the features that Ike saw:

Pembrokeshire has a classic headland and bay topography (the shape of the land), with beaches often forming from deposition in the bays.  These beaches and headlands have proven to be a major attraction for tourists seeking sun and adventure alike.

You can see from the photos that there has been a lot of tectonic movement in the distant past, creating the amazing landforms you can see in the pictures.  There is lots of folding in the rock beds.  These folds often lead to the wonderful rock formations that you can see in the following photos:

Pembrokeshire is a great place to see lots of the classical landforms typically studied in school geography.  How many features can you identify in the following pictures? Answers are at the bottom of this page.

For a long time, some coastal areas in Pembrokeshire have been used to mine coal.  The remnants of the mines can be seen in numerous places across the county.  Below is a photo of a disused mine shaft on Broad Haven beach:

Broad Haven also has a stack called Lion Rock.  When seen from a certain angle it looks like a lion resting.  Ike thinks it needs to be renamed Ike Rock!

Our coasts are always under threat from erosion and human influence.  The PCNP works with tourists to help monitor coastal erosion.  This post has been set up so that people can help the authority monitor coastal erosion.  You put your phone into the slot, take a photo and then send it into the address on the post.  It means that any changes can be monitored.  The PCNP Authority has a number of these posts set up all over the National Park. Ike thinks this is a great idea because it gets people involved and encourages them to really take a good look around them.

With the current COVID-19 situation the PCNP Authority has spent a lot of time and effort trying to ensure everyone is safe on the coast:

Ike spent a few days on the beach relaxing in the sun.  He did manage to sneak in some Geography-related photos, as we’ve seen. Geography Cat knows only too well the perils of going to the coast with a fellow geographer, the opportunities for taking great shots for the classroom are endless. Back here at GC HQ we’re surprised Ike was allowed some time off to simply play in the sand:

Ike on a beach admiring the constructive waves as they come in. 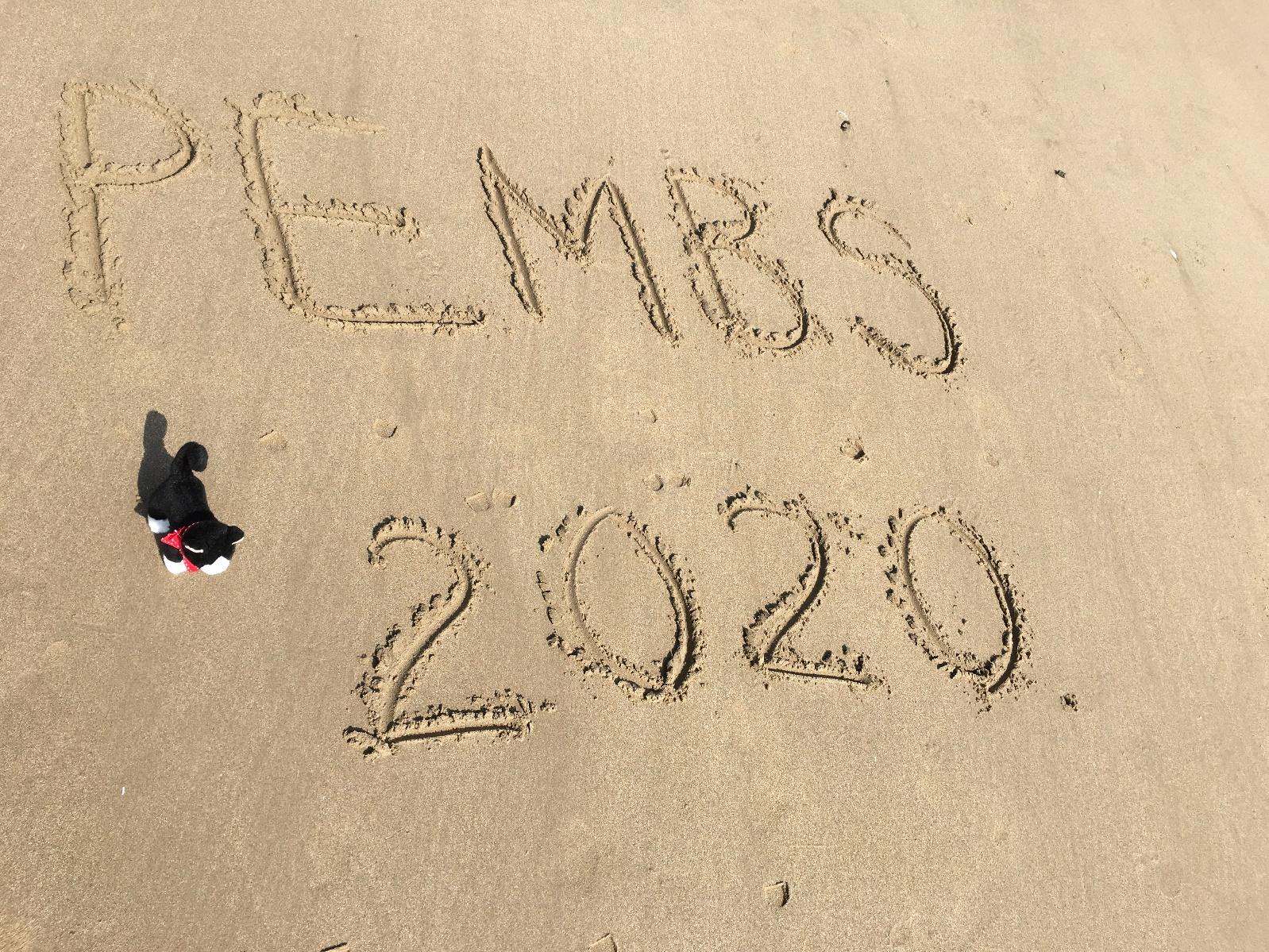 It took Ike ages to find all those shells!

Ike looking at the impacts tourism has on our coastal areas and how it changes places.  He’s also admiring the flooding defences that have been built in Little Haven that stop storm surges and reduce flooding.

While on the beach at Broad Haven, Ike saw some microplastics in the high tide mark; unfortunately, an all too common sight on our beaches.

Ike also got to meet Languages Cat’s Nan, Eileen, who knitted him a lovely German scarf.  Check out the stump and wave cut platforms in the background.

Ike managed to go for a very brief wander around Tenby one evening:

Tenby is the classic honeypot tourist site for Pembrokeshire with huge numbers of visitors every year.  It’s also famous for being the venue of the Iron Man Race and the Long Course weekend.

Tenby in the sunshine.  The boats run out to Caldey Island every day in good weather so people can visit the monastery there.